Due to the increased amount of applications after the Asylum crisis in Europe during 2015, Migri’s telephone lines received an increasing number of calls in the years following. Immigrants inquired about their application status, but there was also an increased need to explain general information to the applicants. This lead to the situation where Migri’s customer phone service did only answer 19% of phone calls in 2017.

It became clear quickly that the solution to the low phone answering rate was not to hire five times as many people, but rather to decrease the number of phone calls. We realised, that the customer phone personnel answered many recurring questions many times a day for different applicants. In the statistics “processing time inquiry”-calls made up 37% of phone calls. This was the number we wanted to decrease first because automating this part of phone calls was doable, and our customer phone service saw a big benefit in cutting away these calls.

Already early in the concepting phase a special project team has been set up within our electronic services unit. There currently work a project owner, two content designers and an AI supervisor fulltime to develop the chatbot. The prioritisation and production of new content is always done together with the Migri substance units as well as legal, communication and customer service experts. The collaboration between the units has also been formalised in the form of a “review group for Kamu”, where all Migri units give feedback to the chatbot answers before the content goes live.

In the beginning Inland was the main driver behind the chatbot project, but as soon as the dedicated team called ENNI was set up Inland become one team members among many. We have shaped how the team works together and introduced user-centered design methods.

One of the biggest pieces of work was to design the chatbot personality. This work was done in response to the question: How can we make sure that people will trust the answers they are given by an automated machine? Our answer to this question was the chatbot personality. We designed this during a workshop with Migri’s customer service experts, a survey in one of the customer service points as well as through a personality user test with the immigrants themselves. Kamu, which is the name of our customer service chatbot, is the outcome of this process that lasted a few months and also included a name-voting by all Migri workers.

Before going live, we gave early access to the personnel of our organisation, which helped us creating trust in the upcoming solution early on.

In June 2018 we ran a pilot and evaluated it during summer, but the chatbot is still in pilot phase to see how it could be developed further and how we can measure it’s impact and contribution in the future. 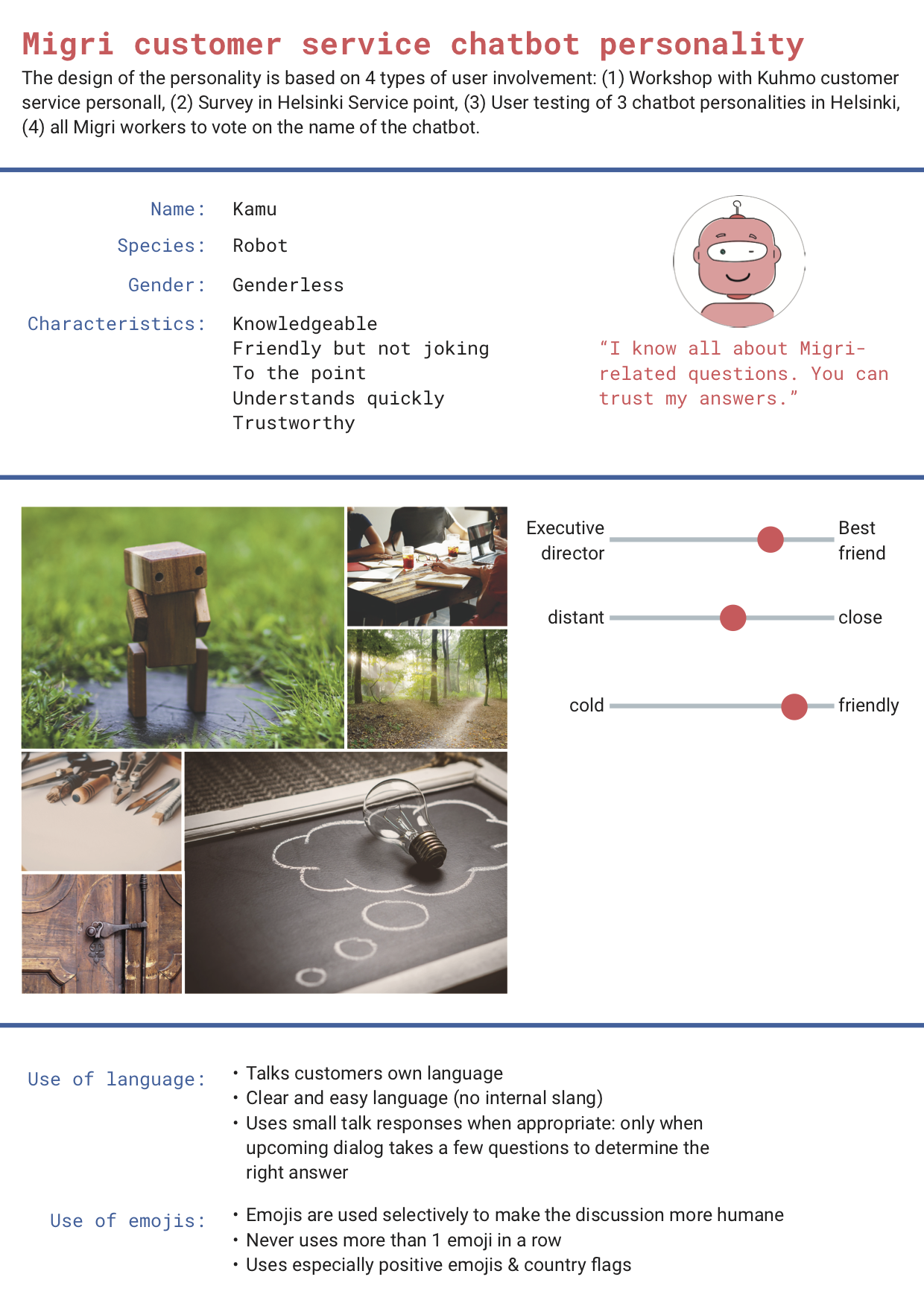 The process of creating Kamu’s personality 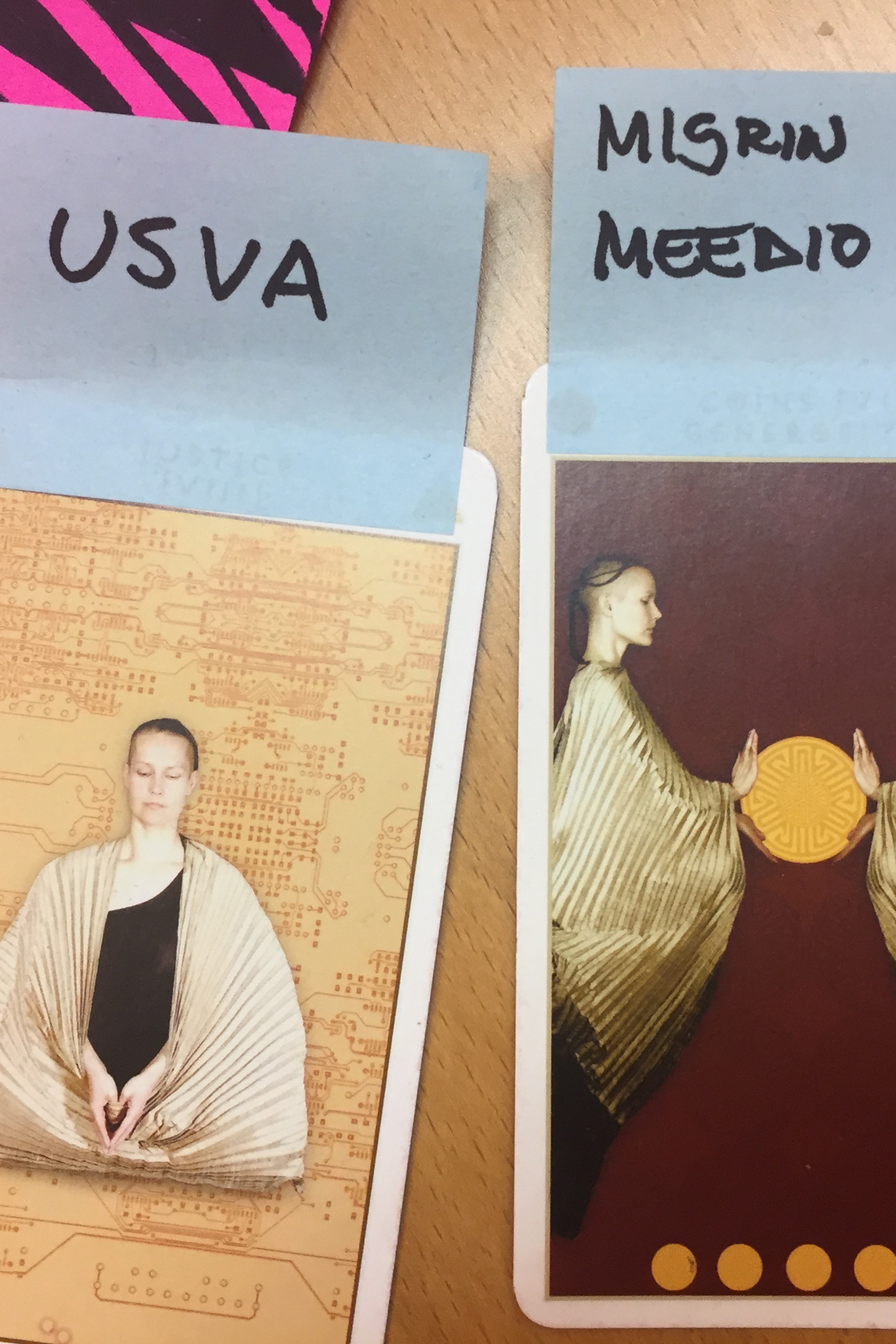 what are the main traits they use in their daily work with Migri’s customers. 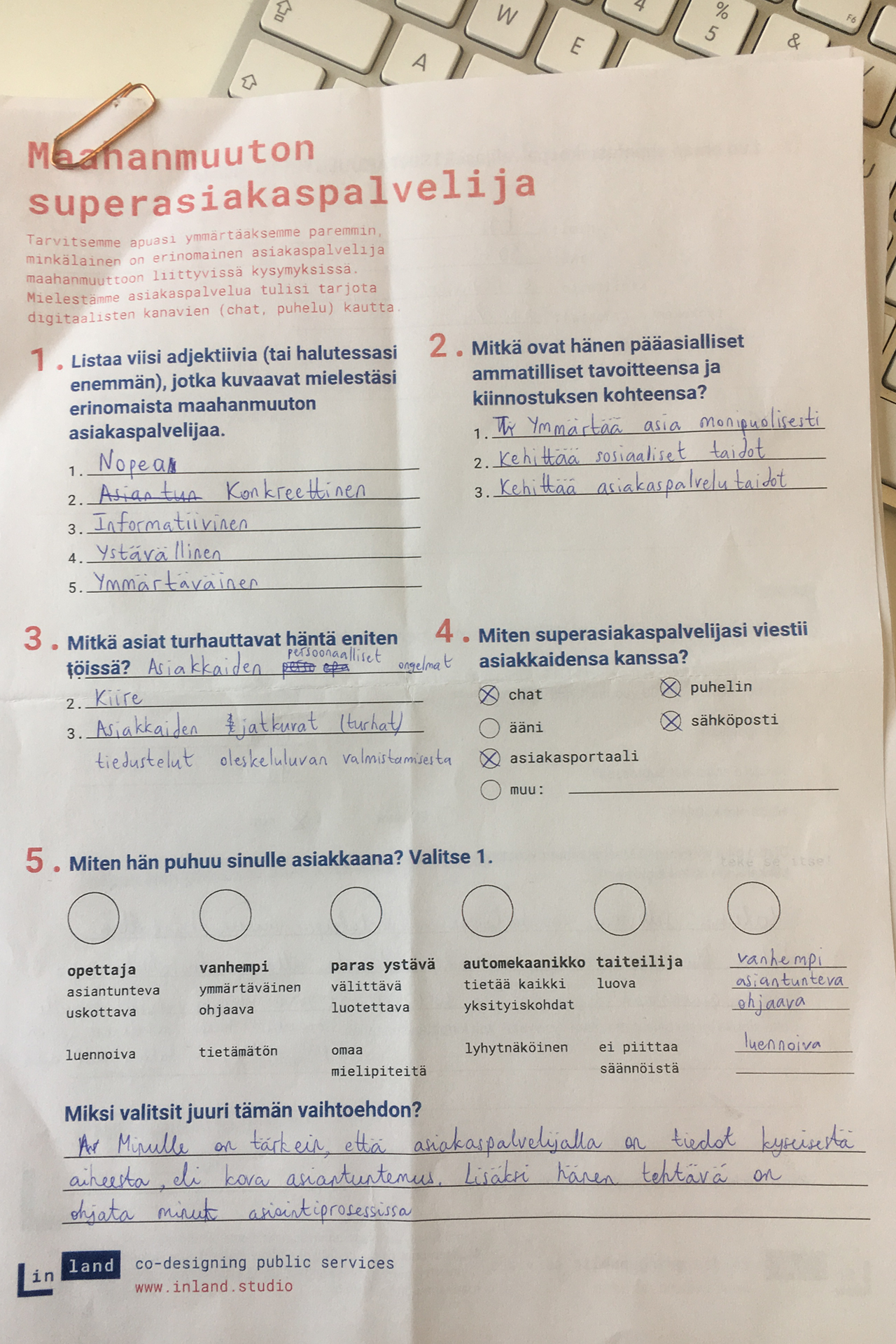 were asked what kind of customer servant they expect at Migri. They could express their own wishes. 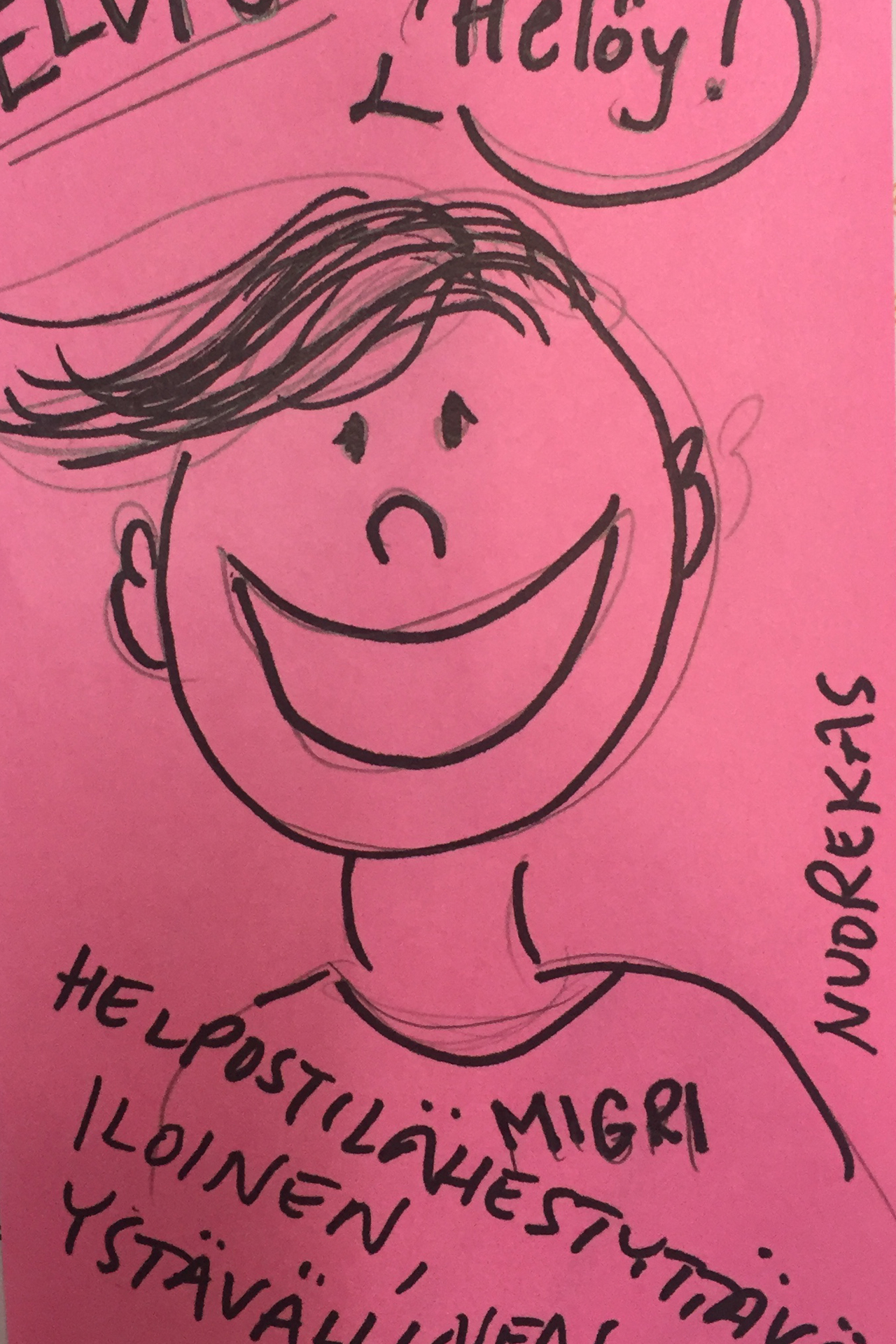 Based on the responses from the first 2 steps 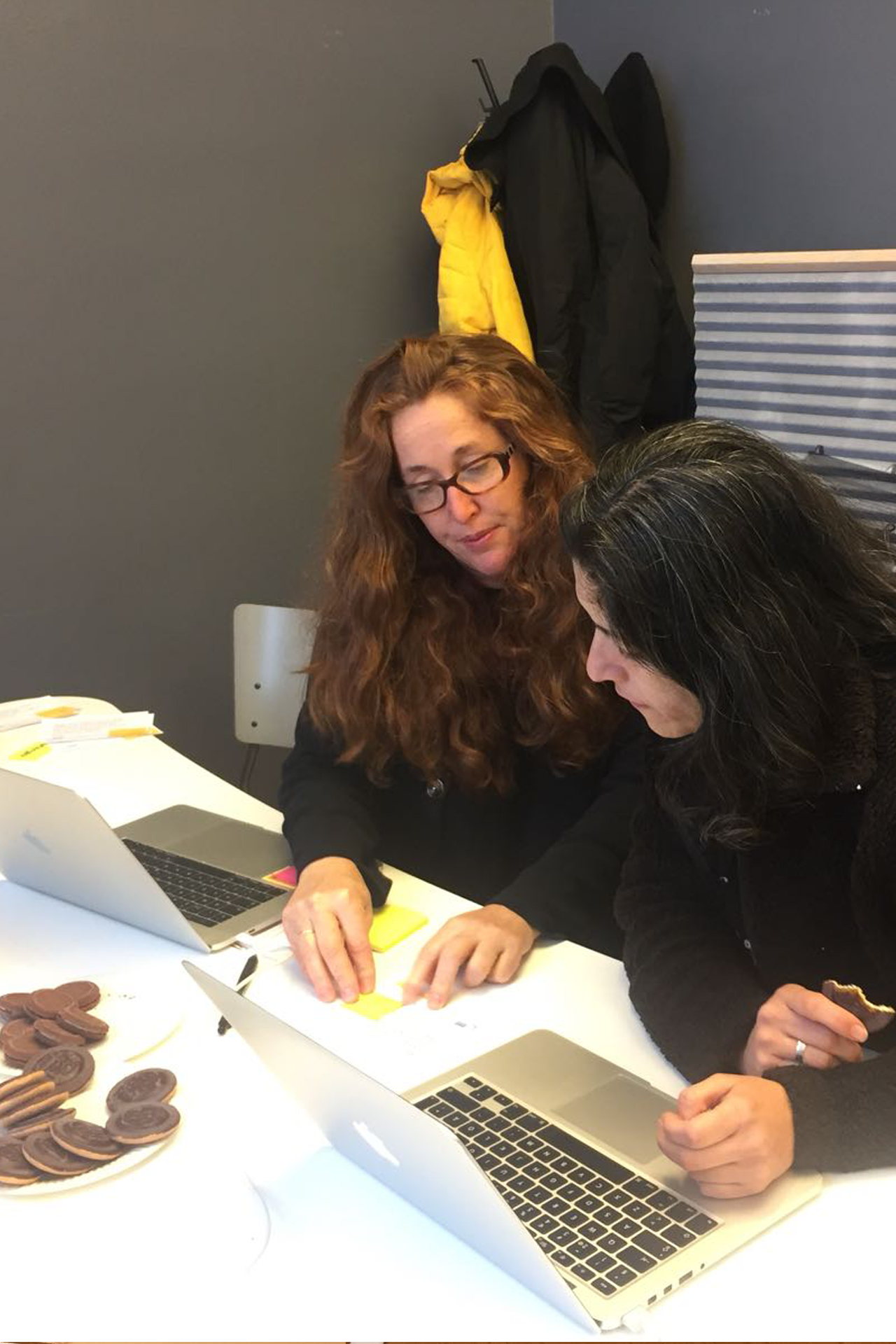 In a usability test

we learned which of the three personality was best suited to Migri’s customer service chatbot: Kamu, the teacher.

Within Migri Kamu is has developed into an integral and accepted part of the customer service offering. In the beginning of the project we had to convince people that adding content to Kamu will bring benefits. Now we receive more requests for new content than the team has capacity to produce. The livechat, previously open only 2h per day, is now open from 9 to 4, just as our telephone customer service.

From the service design perspective there are many things we have learned already from this project: We have designed a personality for a chatbot, something not done often and systematic before. We have set up a team and are continuously helping to improve their working practice. We have made user testing with immigrants an integral part of the team’s mentality. By now, Migri is asked often to explain how we design content for Kamu and also to help building that knowledge in other public organisations in Finland and abroad. We have also started a wider-scope project: Starting up smoothly, in which we collaborate on producing a networked chatbot service with the Finnish Tax Administration as well as the Finnish Patent and Registration Office. 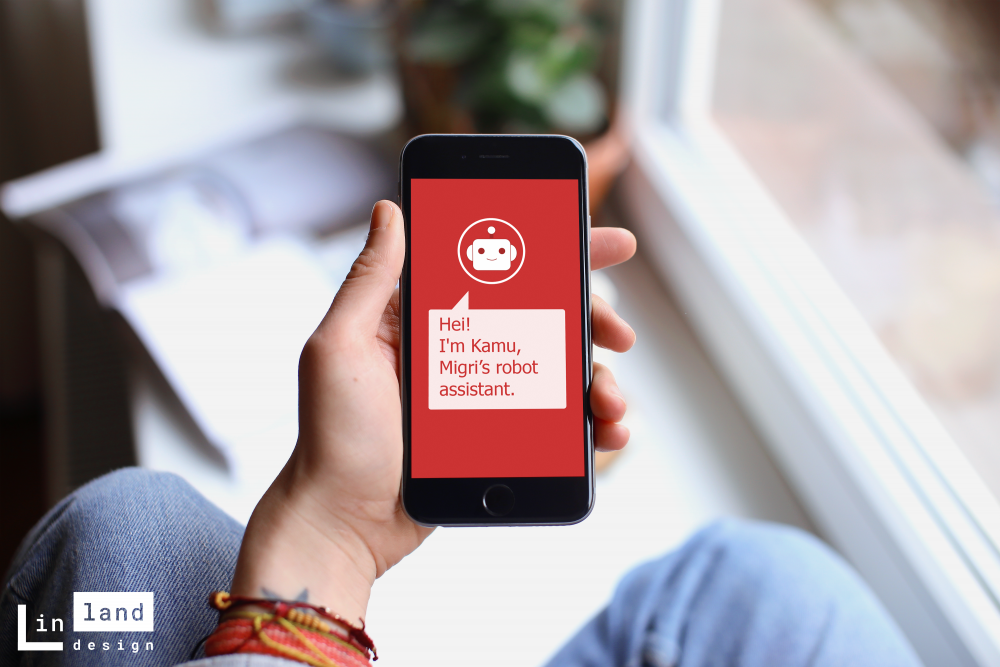 Since Kamu, our chatbot, has become an integral part of Migri’s customer service the team is now setting to solve the next challenges: How can we translate the text-based chatbot into one that users can call over the phone? How can we provide additional value to the users by integrating the chatbot with the case handling system of our organisation? How can we identify users in the chatbot and then give them even more personalised information? Can Kamu even replace one of the specialist phone line services? These are the questions that we will experiment and try to find answers to in 2019. One of the most interesting experiments will be to replace old-school online and paper forms with a conversational interface. The long term vision is to enable immigrants with low levels of literacy handle complex processes (currently reflected in complex forms) by themselves.